Galerie Zdeněk Sklenář / Prague
Due to extraordinary interest, the exhibition has been extended to Saturday, 25 January 2020.

Galerie Zdeněk Sklenář is pleased to present an exhibition of pastels by Karel Malich called Malich 95, organized in honour of an important jubilee – the artist’s 95th birthday. The scope of this unique exhibition shows the fundamental importance of pastel in Malich’s oeuvre, which subsequently influenced the creation of prints, wall and hanging sculptures, and many paintings. The exhibited works also reflect Malich’s creative period from 1952 to 2014, and in March 2016 the artist reached the pinnacle of his work.

The exhibition Malich 95 presents works on paper with a special emphasis on pastels, which played a key role in Malich’s work and became an inspiration for the creation of his other pivotal works. After last year’s successful exhibition of Malich’s sculptures, organized by Galerie Zdeněk Sklenář, Malich 95 presents a representative selection of over a hundred pastels from this crucial period of his oeuvre. With vibrant colours, Malich depicts his cosmological visions, capturing his own experience of inner vision, which is closely related to his extreme sensitivity and analytical thinking.

The emergence of pastels relates to the sixties, a time when Malich devoted himself mainly to collages. “I came to pastels during the communist regime in 1960. I bought two boxes of Rembrandt crayons at the time,” recalls Karel Malich in an interview with the art theorist and curator Hans Ulrich Obrist in a book about Karel Malich written by Jana and Jiří Ševčík. Within this same context, the gallerist Zdeněk Sklenář quotes Karel Malich: “I express myself in my painting through pastels.” One of the major breakthroughs occurred between 1982 and 1984, when pastel penetrated the process of how the work was created. In 1985, the now famous At the Table was made, firmly establishing Malich’s future format of pastel paintings and the subsequent extreme quantity of pastel and tempera artworks.

“Malich’s pastels escape any type of formal classification, and they cannot even be separated according to thematic group. Aspects of colour, shape and meaning remain in a constant state of internal tension without being directly interlinked,” says the art theorist Karel Srp, adding that in Malich’s works, colour is often not linked to shape, or shape and colour to meaning. In that regard, the artist remained completely free.

The visionary Karel Malich is known for a number of pioneering discoveries. His famous wire sculptures or utopian designs of the architecture of the future were introduced in the past, not only at Galerie Zdeněk Sklenář but also at a number of prominent foreign art institutions – for example in 1967 at the Guggenheim Museum in New York, and later at the Finnish Pori Art Museum, and the Ludwig Museum Koblenz and ZKM Karlsruhe in Germany. In connection with the exhibition Malich 95, the editorial department of Galerie Zdeněk Sklenář is producing the monograph Karel Malich/Pastels, which will be published next year. The book, with texts by Karel Srp and photographic reproductions of hundreds of pastels, is a tribute to one of the most prominent contemporary Czech artists, and draws attention to this important creative period associated with works on paper, with a special focus on pastels as the initiating milestone for the future use of other media.

Visionary Artist Karel Malich, a Pioneer of New Forms of Expression, Has Passed Away
Malich 95 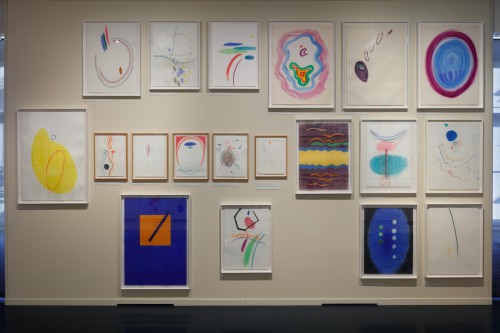