An exhibition like this has not taken place here for a long time. Installed in the form of fourteen “interludes”, it provides a unique opportunity to experience some of the pivotal moments in the developments in Czech art from the twentieth century and first decades of the twenty-first.

The first interlude starts with the realism of Antonín Slavíček, the best-known representative of the Mařák school of landscape painting.

Following this lead-in, the second interlude offers a look at how abstraction developed in the oeuvre of František Kupka. This artist is represented by four artworks, which show how he shifted from realism to symbolism and ultimately to abstraction. This is the first time that Kupka’s gouache The Big Bang, made in the early 1920s, is being exhibited in Prague. This particular artwork was selected as the exhibition’s logo and appears on the invitations and posters designed by the graphic artist Zdeněk Ziegler.

The third interlude was personally installed by the painter Jan Merta and the gallerist Zdeněk Sklenář, and it belongs to the two key representatives of Czech cubism – Emil Filla and Bohumil Kubišta.

The fourth interlude is devoted to Jindřich Štyrský and his painting A Night in May. The artist painted this masterpiece of Czech surrealism during his artificialist period, and it reflects his love for Toyen.

The focus of the fifth interlude is on photography, which is represented by the famous Josef Sudek – the icon of twentieth-century Czech photography.

The sixth interlude presents Bohuslav Reynek and some of his previously unexhibited works. His painting of Saint Wenceslas, made between 1948 and 1949, is one of the mere nine paintings that Reynek made over the course of his life. The story of this painting is shrouded in mystery – it was originally made for the chapel consecrated to Saint Wenceslas in Petrkov, but following the events of 1948 it remained hidden in private ownership and this is the first opportunity we have to see it. In addition to this painting, the displayed works include Reynek’s The Crucifixion, which he made using the cliché-verre technique and so earned a place amongst the experimenters of the twentieth century.

The seventh interlude belongs to two unique stars – Karel Černý and Zdeněk Sklenář. These two close friends are once again brought together after many years through their artworks, which were made using the same colour palette. The significance of the role played by these special individuals has recently been the subject of more attention. Sklenář, like Kubišta and Purkyně, was a representative of the so-called “severe style”. Here he is represented by one of his early works – the dreamlike landscape Nights of Benefaction (1939).

The eighth interlude focuses on Czech Informel art as represented by the works of Mikuláš Medek, Vladimír Boudník, and Karel Nepraš.

The following interlude – the ninth – is devoted to Jiří Kolář and his collages. This artist abandoned the written word and poetry at the start of the 1950s and began to create visual works.

The tenth interlude presents the artwork of two symbolic proponents of the new vision of light in painting – Josef Šíma and Václav Boštík. Boštík’s Heavenly Jerusalem is installed in the main view of the exhibition, in a position that enhances the power of this abstract contemplative painting. A second work by Boštík – his Abstract Motif – is an experiment the artist made by painting on x-ray film. This is a unique work at the global level and it is being shown for the first time. Šíma is represented by his painting Plougrescant and his ink drawing Claire Almond, which were made during his peak Parisian period.

In the eleventh interlude you will encounter the art of one of the pioneers of incorporating the use of a computer in the process of making an artwork – the painter Zdeněk Sýkora. At this exhibition, he is represented by two paintings: the first is from 1961, in which he worked with the relationships between colours, and the second is a line painting from 1998, specifically Lines No. 146, which is only one example of the countless artworks that earned Sýkora a place in the annals of world art history.

Karel Malich is the subject of the twelfth interlude, which provides a rare opportunity to view this artist’s development from a different perspective.  The period of his famous hanging sculptures and pastels has intentionally been omitted. This interlude devoted to Malich starts with a realistic landscape from 1954, which is a unique surprise. The next work on display is a gouache 1961, where the landscape is already portrayed in an abstract way. In 1964, Malich created landscapes torn away from this world. One year later, his subsequent modelling of mass led to his first sculpted relief, and the painter definitely became a sculptor. In addition to one of the artist’s two-dimensional reliefs from 1967–1969, the exhibition includes a few pastels Malich made after 2000. In them, the artist has radically transformed his way of depiction, marking the peak of his oeuvre.

The thirteenth interlude is devoted to the world-famous discoverer of the use of sound in the creation of a painting – Milan Grygar. His Blue Antiphon from 2016 resolves the co-existence of two disharmonic effects in mutual harmony through painting techniques. Grygar’s artwork is highly complex for viewers, as it places them face to face with unusual visual perceptions. One can say with certainty that Milan Grygar is one of today’s greatest, paramount artists who uses his art to ask the question of how far present-day painting can go.

For the fourteenth interlude, the gallerist Zdeněk Sklenář selected Jan Merta. The artist’s portrait of the Russian writer Daniil Kharms – Daniil Kharms in Reverse (2012–2020) – is an example of premier coup painting and, together with the artist’s Gloves (1994), this culminates our exploration of more than one century of Czech art.

Guided tours have been planned to accompany the exhibitions, which will take place on Saturday 25 July, 8 August and 15 August 2020 starting at 11 am. Please register by sending an email to: event@zdeneksklenar.cz. 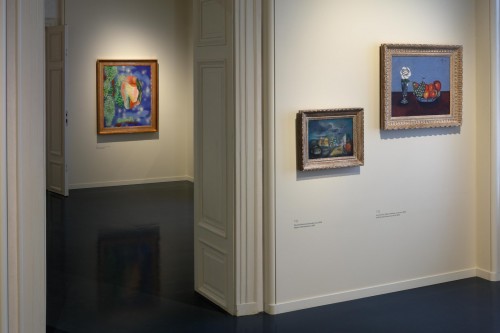 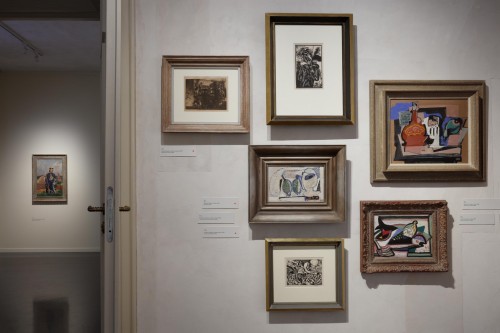