Ludwig Museum Koblenz
The exhibition Prague Power Boost is documented in a representative English and German bilingual catalogue with original graphic design by Kryštof Doležal / Studio Breisky, which was published by the Galerie Zdeněk Sklenář in cooperation with the Ludwig Museum in Koblenz.
The catalogue is available for purchase at the Galerie Zdeněk Sklenář (at Salvátorská ulice 6 in Prague, or in Litomyšl, Czech Republic), or on the gallery’s website at:
This exhibition, honouring young Czech art, will be officially opened on 5 February 2017 at the prestigious Ludwig Museum in Germany, presenting the works of three Czech artists: Krištof Kintera, Josef Achrer, and Mark Číhal.
These, at first glance all artists of a different type, impressively characterise the diversity of the young Czech art scene, which, partly because of the political situation prior to 1989, has developed into a unique artistic whole, which is gradually breaking through abroad.
Krištof Kintera (born in 1973) is a performance artist, painter, and sculptor who has long enjoyed international acclaim. His works shown at the Ludwig Museum are a mix of his most recent works and some of his “classical” ones, all respectfully reflecting Kintera’s originality. His previous representative exhibitions at the prestigious Museum Tinguely in Basel, and at the Ron Mandos Gallery in Amsterdam, the exhibition Private Planet for Everybody introduced in Brussels, the Levitate exhibition at the MuseumsQuartier in Vienna, and the currently planned monumental installation Postnaturalia for the Collezione Maramotti, all serve as confirmation of the interest in this artist’s work throughout Europe. His kinetic and audio sculptures and installations are a surprising combination of objects presented in innovative forms, questioning the existing stereotypes that are used to judge art. Movement, sound, light, and voices are an integral component of his works, and they are not randomly combined – they always have a deeper meaning. In an interview published in the exhibition catalogue, Krištof Kintera says: “I am inspired by the bizarreness of reality, which, in many cases, is crueller, more absurd, and more peculiar than art itself.”
At the start of 2016, Josef Achrer (born in 1982) introduced his Manifesto of Dataism and the Infomanic Society. It is the result of many years of thinking about the dangers in the information field, which includes data transmission. He defined his personal position against the use of data, its manipulation and distortion, data recording, and the concealment of data… and, in a highly original way, he presents data both theoretically and through painting. His work contains a positive warning against the negative impact data may have on the way we all think. This unique contribution to the world’s art and its importance for Asia was discovered in the Czech Republic by Professor Lü Peng, an internationally respected Chinese art historian. Achrer’s art residencies in myth-enshrouded China, where he lived and worked – including the lecture he gave at the Central Academy of Fine Arts (CAFA) in Beijing – culminated in his exhibition at the Today Art Museum in Beijing. The subsequent exhibition series, entitled Tour de China (a total of five exhibitions, starting at the Today Art Museum, continuing to the L-Art Gallery in Chengdu, and ending at the Baijia Lake Museum in Nanjing) received exceptional acclaim and has resulted in what has thus far been the greatest number of additions to private as well as national collections in China and Asia.
Marek Číhal (born in 1986) is the youngest artist ever to be presented at the Ludwig Museum. His paintings are a synonym for the interconnection of drawing and painting into a harmonic whole. He portrays the moral decline of society, using visual fables depicted through painting, to present a world where protagonists may be animals just as often as they might be inanimate objects and humans. The just-turned-thirty artist has been gaining respect thanks to his ability to link various technologies using neon lights, which bring his drawings to life. His exhibited works – mainly paintings loosely inspired by the museum’s founder, Peter Ludwig – were personally selected at Číhal’s atelier in Prague by Professor Beate Reifenscheid, the curator of the exhibition and the director of the Ludwig Museum. Číhal has collaborated on many installations with the architect Václav Hlaváček of Studio Acht. These include, for example, the installations in the underpass beneath the Frýdlant Bridges in Ostrava, and a large 8 x 12 metre canvas in the foyer of the Marriott Hotel in Brno. Other works that are to Číhal’s credit are the neon altar beneath the Bolt Tower in Lower Vítkovice, the entry hall to the CTP headquarters in Humpolec, his monumental drawing in concrete in the foyer of the Office Centrum Ostrava, his neon drawing (measuring 25 x 40 metres) on the sound barrier wall in Prague’s Prosek District, and a painting on the body of a private aeroplane (a Swiss-made Pilatus PC-12).
Previous exhibitions by Czech artists at the Ludwig Museum in Koblenz, Germany, received wonderful reviews, specifically Karel Malich (Karel Malich: Cosmic, held from 30 March to 1 June 2014), and Milan Grygar (John Cage / Milan Grygar: Chance Operations & Intention, held from 30 August to 8 November 2015). The same applies to Milan Grygar’s solo show at the ZKM Karlsruhe (Milan Grygar. Sound on Paper, held from 23 July to 30 October 2016), and the extensive exhibition Art in Europe 1945-1968 (The Continent that the EU does not know, held from 22 October 2016 to 29 January 2017), which naturally included works by sixteen Czech artists within the context of developments in European art. All of these events have one thing in common – they reflect an important effort to initiate a re-evaluation of the position held by Czech art. 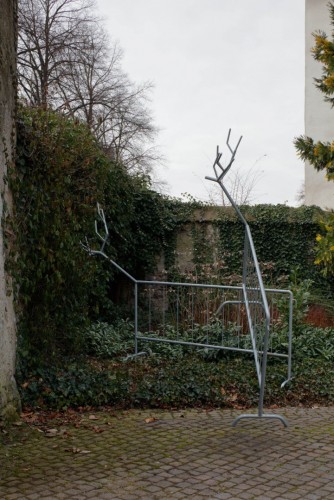 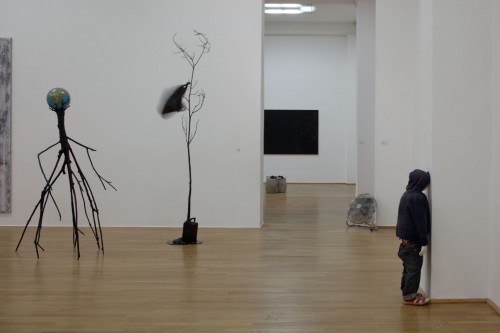 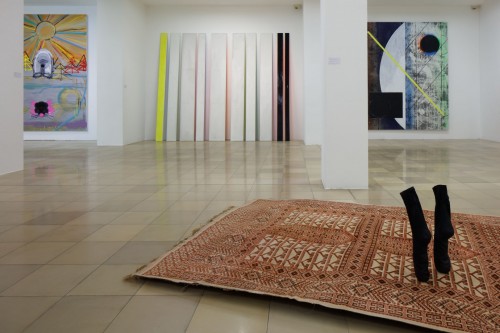