Theodor Pištěk: Interviews with Hawking. Paintings from 2017 to 2021

Galerie Zdeněk Sklenář / Prague
Galerie Zdeněk Sklenář is holding an exhibition of the artist Theodor Pištěk called Interviews with Hawking. Specifically, it comprises a collection of paintings from the years 2017 to 2021, through which Pištěk professes his personal, in many ways even emotional bond, to the world-famous British physicist Stephen Hawking. He conducts his visual dialogue with the legendary scientist through the medium of painting. The artist imprints his intimate discourse in large geometric structures, which create space for imagination and silent contemplation not only over Stephen Hawking’s scientific legacy, but also over the mysteries of the universe. It is a purely personal declaration rather than a descriptive cycle of paintings, and through it Pištěk strives to respond to the ideological message of Hawking’s scientific findings about the theory of the universe and how it functions. This places Pištěk on the list of present-day international artists who have been inspired in their work by the genius scientist – others include David Hockney, Annie Leibovitz, Jake and Dinos Chapman, and Zdeněk Sýkora.

Hawking professed his love and fascination with the universe through theoretical physics and applied mathematics. Pištěk does so through painting. In his dark cosmic images, Pištěk visualises the universe as a symbol of infinite mystery and the desire of the human mind to discover what is hidden. In his paintings, we can also observe in them the painting themes on which the artist continues to focus: the relationship between space, depth, and illusion. Unlike Pištěk’s previous work, as symbolised by photorealistic painting, the current Interviews with Hawking exhibition presents abstract, to the point of contemplative, painting, which opens up space for imagination and mystery.

“Don’t look for anything specific in my paintings. I don’t paint black holes or any of the other cosmic wonders and phenomena described by Hawking. I paint my imaginative relationship to the universe and to the mysteries hidden within it,” explains Pištěk. 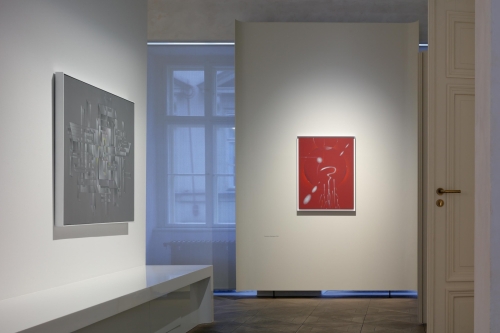