Musem Kampa
The Museum Kampa and the Zdeněk Sklenář Gallery are honoured to be able to present to the international public for the very first time the impressive relief made by Karel Malich in 1978–80 for the canteen associated with the university dormitories located at Bolevecká 34 in Pilsen-Lochotín. From 9 February to 31 May 2016, Museum Kampa visitors will be able to view this unique work made by an important Czech painter and sculptor, which, until last spring, remained out of sight on the premises of the university dormitories in Pilsen.
The relief from Pilsen will be exhibited together with Malich’s Black and White Sculpture (1964–65), the artist’s representative work that was displayed at the Sculpture from Twenty Nations Exhibition at New York’s Guggenheim Museum in 1967. Additionally, visitors will have a unique opportunity to see a cross-section of Malich’s works from the 2010 to 2015 period.
“I am happy that we reached an agreement with representatives of the University of West Bohemia in Pilsen and have been able to borrow this once lost, now rediscovered work by Karel Malich. According to experts, this is one of the largest reliefs that Karel Malich created in the 1970s. This exhibition offers visitors a remarkable opportunity to see this impressive work by an important Czech artist for the very first time. The entire exhibition is built specifically around this relief, and the exhibition designers show how it fits into the overall context of Karel Malich’s creative work,” says Jiří Pospíšil, a member of the Board of Directors of the Jan and Meda Mládek Foundation.
The large-format relief, dating back to the second half of the 1970s – a decisive period in the artist’s creative career – uses curves formed of wire to depict the relationship between a human figure and swirling airborne eddies. In the years following its initial installation, it gradually fell into oblivion. None of the changing chain of building managers were ever aware of its artistic and cultural value. It was discovered only thanks to the intense, systematic efforts of the Pilsen-based group Křížky a vetřelci (in English, Crosses and Aliens, comprising Aleš Hejna, Pavel Cvrček, and Daniel Jahn), who undertook the task of mapping out objects dating back to the normalisation period in the Pilsen Region. After a thorough search, Daniel Jahn found the relief in 2015, still in its original location, but concealed by cabinets. Although slightly damaged, it has retained its distinctive exhilarating charge, successfully capturing the viewer’s attention at first sight through the way in which it expresses the relationship between the graduated outline of the artist’s head, as depicted by lines of white, grey, and black, and the blue background, filled with colourful wire curves representing the flow of a diverse variety of energy. Malich created this symmetrically conceived relief, the centre of which is formed by an outline of the artist’s head – designated as his “ego” – during the same period that gave birth to his best-known wire sculptures:  I’m Watching the Sky, Inner Light I and II, and Crack in Space. Although the relief for Pilsen was a public commission, it was still directly related to his contemporary creations, which, at that time, were unparalleled in the international art world.
Within the exhibition, the relief is presented in relation to Karel Malich’s current works, which it unwittingly foreshadowed and also in connection with his older Black and White Sculpture (1964–65).  The relationship between black and white on the one hand, and colour on the other, are the connecting link between his Pilsen relief and his recent works from the 2010–15 period. It was not expected that, after more than a decade during which Malich devoted himself to only drawing, he would return to his three-dimensional sculptures, of which he has, to date, made almost eighty. His wall and hanging sculptures, made from steel wire and plywood, provide evidence that entering space continues to remain an open challenge for Malich – a challenge to which he responds with simple geometric shapes that bear deep meanings that refer back to the artist’s personal past as well as to ageless cultural symbols. 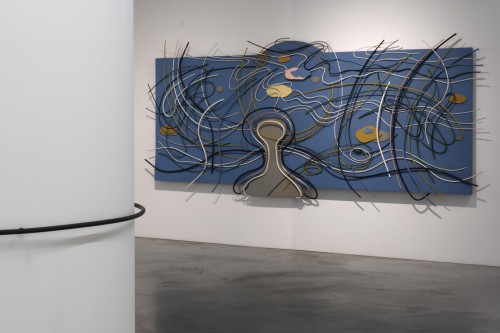 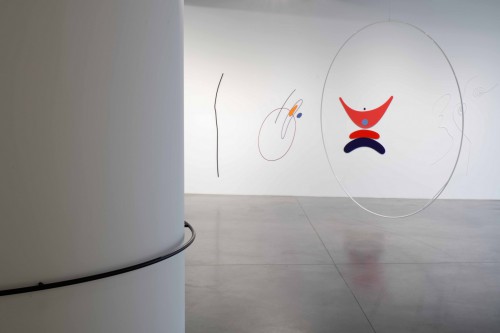 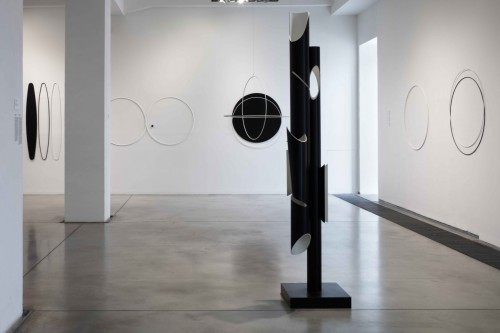 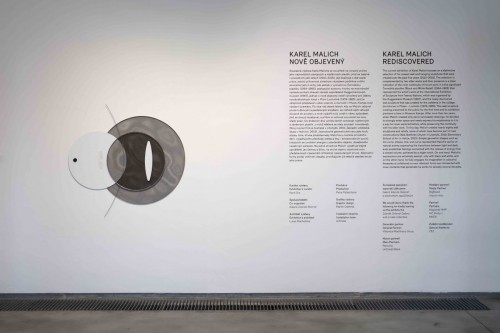