A certain chaos rules in Krištof Kintera’s Prague studio and there are many things in various boxes – shoeboxes, banana crates… It was specifically this that inspired the fine press publication I Am Not You, which was produced to accompany Kintera’s eponymous exhibition at Museum Tinguely in Basel, Switzerland (held from 11 June to 28 September 2014). The original plan was to publish a traditional bound catalogue, but a series of fortunate coincidences and the museum’s daring made it possible to bring this small, unbound “game” to life – a sort of small, personal exhibition space in a box. And with an accompanying story no less…

At the instigation of the graphic artist Petr Babák, Krištof Kintera produced a mock-up on A4-format paper using his run-of-the-mill home printer, which he then took to Basel. Both the museum’s director and the exhibition curator immediately found its spontaneous nature and authenticity appealing. The concept was further elaborated and finalised by Jiří Oplatek, a graphic artist of Czech origin, who brought together Kintera’s computer data, fourteen types of paper, and the rehabilitation workshop where all of the copies of the fine press publication were produced. The workshop employs homeless people and alcoholics, allowing them to readjust to regular work and making it possible for them to return to an independent life. Their task was to imitate the original mock-up by manually gluing all of the pieces of paper together and completing the publication. Since it has 400 pages and 1,000 copies were produced, this mean that 400,000 sheets of paper had to pass through their hands. Students visited all of the city’s shoe stores in order to accumulate a thousand shoeboxes.

Each box contains not only photographs of Kintera’s objects, but also his sketches, design plans, and technical diagrams, all of which present the background of how each original artwork came into being. Also included is an interview between Krištof Kintera and the Museum Tingeuly’s director Roland Wetzel and the exhibition curator Andres Pardey. 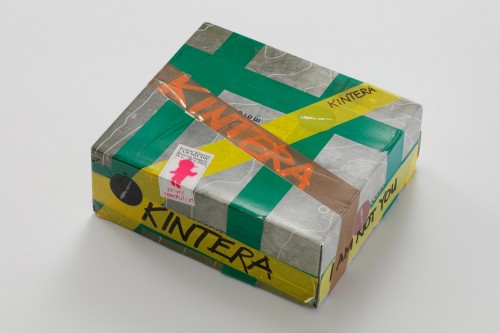 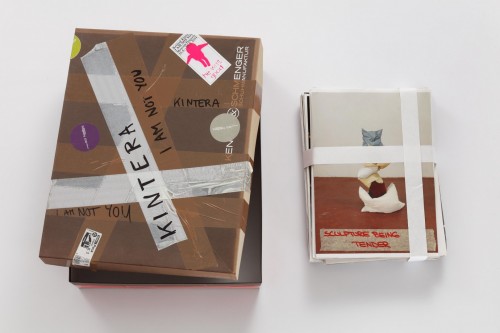